The Museum of Prosciutto and Cured Meat Products of Parma has its seat in Langhirano,elected fatherland of Prosciutto from Parma, in the vast structure of the former cattle market.

The area today occupied by the cattle market situated between the historical centre of the town and the river Parma is the result of a process of urban renewal from the first decades of the XX century which liberated a vast area next to the river destined to be cleared, developed and urbanised with the construction of different buildings and public services.  The slaughterhouse and cattle market can be dated to this time as can the sports ground and the bridge which joins Langhirano to the municipal area of Lesignano.

The cattle market project was, however, only partially realised: originally a large courtyard was to have been built enclosed on all four sides by two ‘C’ shaped constructions, with a high portico terminating with two tower like buildings at the corners overlooking the great entrance gate.  For economic reasons only half the construction was finished together with the large square facing the slaughterhouse which was destined for the open air cattle market. 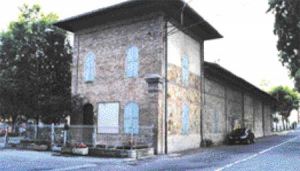 The history of the Langhirano cattle market is tied to the economic history of the territory and to the identity of the town itself, pole of attraction of the high Parma river valley and marketing and processing centre for those products of the agricultural activity of the area.  The building, seat of the municipal warehouse until 2002, is a walled structure of stones placed mosaic like with alternate pilaster strips of brickwork.  The roof is double pitched characterised by the traditional system of wooden trusses typical of agricultural and paleo-industrial constructions of the Po river area.

The portico which delimitates the internal space is 6 ½ metres deep and is 5 metres 80 high at its topmost point, so it has been possible to make a mezzanine floor for the museum. The former tower, which marks the entrance on the West and used to be the custodian’s house has been converted to house the Museum offices and the welcome and tourist assistance areas.

The choice of the cattle market as seat of the museum, placed as it is in an easily accessible  area of town near the centre and the main historical ham curing plants, has permitted the functional recuperation of a structure firmly tied to the economic life of this territory and at the same time its transformation into an instrument of interpretation and understanding of the food industry of today. 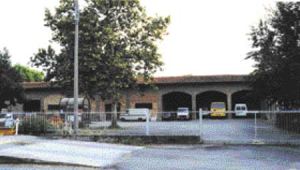 The courtyard before restoration