The history of Parma Ham

The pluri-secular tradition of curing pig meat by placing it in a pig bladder was only laid down as a separate activity towards the end of the Middle Ages by the Guild of the ‘Lardaroli’ who were a specialist Guild offshoot of the more powerful Butcher’s Guild. 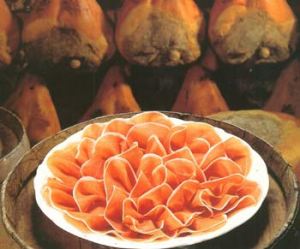 The fame of Parma Ham, which was an exclusive speciality of the Parmesan Lardaroli,  has its roots in ancient times, indeed it goes back to Roman times. Parma, which was then situated at the heart of Cisalpine Gaul, as is recorded by Varrone in De Re Rustica, was famous for the activities of its inhabitants who bred large herds of pigs and were particularly able in the production of salted ham. Cato himself already in the second century B.C. in his De Agri Coltura delineated the production techniques which are substantially identical to today’s procedures.

Over the course of centuries many authors have treated ham and its preparation techniques: Polibius, Strabone, Horace, Plautus, and Juvenal.  Gastronomic references to Prosciutto from Parma can be found in the Libro de Cocin from the second half of the XIII century, in the wedding banquet menu of the Colonna family in 1589, in the precious text of Nascia, the cook of Ranuccio Farnese in the second half of the XVII century.  Prosciutto can be found amongst the rhymes of Tassoni and in the dietetic advice of the Bolognese Doctor, Pisanelli.

The curing process of Parma Ham

The primitive and entirely artisan ‘hands on’ way of curing pork meat has progressively developed until our days towards an industrialisation process which, sensibly improving hygienic conditions, has been able to maintain the traditional characteristics of the product intact.

The denomination of Prosciutto di Parma is attributed in relation to the zone of origin of the animals (Emilia Romagna, Lombardy, Piedmont, the Veneto, Tuscany, Umbria, the Marches, Lazio, Abruzzo and Molise) together with the inimitable microclimatic and environmental conditions of a delimited hill area of the province of Parma where the action of the air which, from the sea of Versilia  rises and sweetens over the olive groves and pine woods of the Magra valley, drying out over the Apennine hills where it becomes enriched with the scent of sweet  chestnuts, finally reaches the Parma hams drying them, while imparting an exclusive and particular sweetness.

To safeguard first the quality of the raw material and then observance of the scrupulous norms involved in working the hams, in 1963 the Consortium of Prosciutti di Parma was established charged by the Italian State on 3rd July 1978 with checking the product and guaranteeing compliance with the standards laid down by the disciplinary norms by means of application of the famous brand mark of the Ducal crown on the outside rind of the ham.

The Consortium, which also has the function of promotion and valorisation of the product, has been recognised within Europe and has been granted the faculty of carrying out controls in other countries like the USA.
The Prosciutto di Parma has been granted the  DOP or Denomination of Protected Origin by the European community.